Film professionals, lovers of the 7th art or simply on the lookout for your favorite star, discover what the 75th edition of the Cannes International Film Festival has in store for you. Book your stay at the Hotel des Orangers to be as close as possible to the event while enjoying the calm and discretion of the Suquet district.

For the 2022 Cannes Film Festival, stay at the Hotel des Orangers, a 10-minute walk from the Croisette and the Palais des Festivals. Take the opportunity to discover the picturesque district of Suquet which is drawn from the window of your room.

Upon your arrival at the hotel, immerse yourself in the magical atmosphere of the event with our glamorous-themed decor of the cinema and red carpet icons. Silence ! Rolling… and action !

Live at the unbridled pace of the most prestigious evenings of the year and try to get the precious sesame that will allow you to access the previews showing with the stars. End the evening in one of our 50 comfortable rooms. 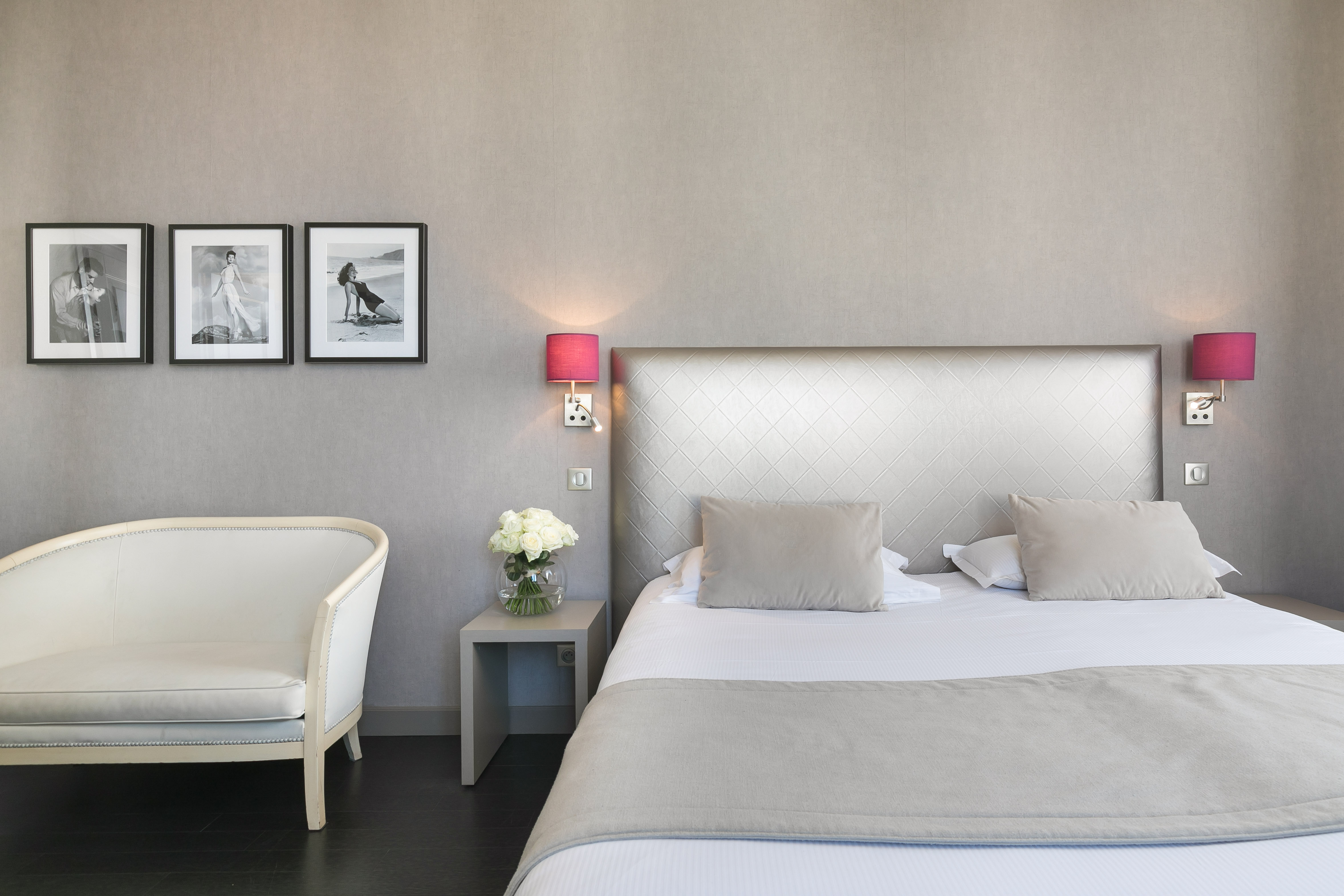 The 75th edition of the Cannes Film Festival takes place from Tuesday 17 to Saturday 28 May 2022 at the Palais des Festivals in Cannes, a 10-minute walk from the Hotel des Orangers Cannes.

The Cannes Film Festival is an opportunity for all film professionals to gather on the famous red carpet. The biggest international stars are present to discover the next successful films.

Broadcast this year in France by France Télévisions and Brut, it is one of the most mediatized events in the world and the most important international film festival. It takes place under the watchful eye of Iris Knobloch, President of the Cannes Film Festival (first woman in this position), and Thierry Frémaux, General Delegate.

This event aims to reveal and highlight high-quality cinematic works, to foster the development of the film industry as well as to celebrate the 7th art internationally.

At the same time as the Cannes Film Festival is taking place the Film Market, the most dynamic film market in the world, where distributors, producers, sellers and buyers negotiate for a long time to get the best works of the year.

A jury and an exceptional selection on the Croisette

Which stars will be on the red carpet this year ? What will the official poster look like ? The answers mid-April on the official website of the Cannes Film Festival at the same time as the announcement of the official jury.

All we can tell you right now is that the mistress of ceremonies will be Virginie Efira. This must-see actress of French cinema will present the opening and closing ceremonies of this event.

Tom Cruise will also make his big comeback on the Croisette to present a preview of his new film : Top Gun, Maverick. The famous sequel to the movie that made him famous in 1986. The actor will resume his role as a rebel fighter pilot in a brand new chapter full of action.

To make you wait until then, discover in video the best moments of the Cannes Film Festival of the 2021 edition.

The Cannes Film Festival is a springboard for young film professionals and actors of all nationalities who want to become as famous as Quentin Tarantino, Steven Spielberg, Alain Delon or Audrey Hepburn. The official selection, selected from more than 2,000 nominees since November, is also unveiled in mid-April.

Every evening, throughout the event, an iconic film is screened under the stars, feet in the sand, at the Beach Cinema (Mace Beach). The screenings are free, be the first to get a chair. Be careful, the seats are very coveted !

Enjoy the magical atmosphere of the Cannes Film Festival, by booking your stay at the Hotel des Orangers Cannes now. To be close to the stars and access the Croisette in a few minutes on foot, this is the hotel you need !